Of course as kids in the 1920s and 1930s we had bikes; at first tricycles and then real bicycles. When they were new my father forbade us to roam the neighborhood until we could, without wobbling, reliably make a three-hundred and sixty degree turn in the narrow street in front of the house.

For many years they took us everywhere. In high school one year I rode most days twelve miles from Wellesley to my summer job in Boston. The bike was gearless but even so I was able to make it once from Portland to South China, Maine and back with a knapsack and sleeping bag.

In about 1964 I convinced my father-in-law, Bethuel M. Webster, that he should “bequeath” to me his venerable and classic 1950 model Raleigh, Sturmey-Archer three-speed. It had long been idle among the cobwebs of his barn at “Windrush.” Even so the negotiation was a delicate matter, well understood as I now write, as he was loath in his later years to admit that he would probably seldom mount it again.

Over the next twenty years I probably added 8,000 miles to its history, at first on the two-mile daily commute to the train station at Wellesley Farms, and later in Cambridge from Central Square to the Prudential Center. This commute on Mass. Ave. I did every day rain or snow or shine for six years accounting for some 5,000 miles of the history.

It was on this commute that I sometimes found myself waiting at a stoplight beside a rider on a recumbent model—on which the rider reclines comfortably in a chair-like seat, a steering bar behind him, and pedals up in front. He turned out to be Prof. David Wilson of MIT with whom I would converse until the light changed. He is well-known in bicycle circles and is an avid advocate of the recumbent style.

I was fascinated by the recumbent concept but did nothing until one day, passing the Bicycle Exchange in Harvard Square, I saw one for sale in the window. Bill Darby, the owner, and I wheeled the bike down to a suitable path along the river where I gave it a try. It was very wobbly at first but I could see that I could get the hang of it and, without seriously thinking further, impulsively made the purchase. It was pretty pricey, but what the heck—an adventure.

I gradually tamed it. It was heavy (40 lbs) and, as I soon learned, hard to pedal uphill because the rider could no longer add his weight to the torque on the pedal down stroke. So uphill was slow and wobbly for a while and seemed dangerous on big roads. Inevitably strength and improvement came and before long I was riding pretty confidently, even to work from Weston to Boston; door-to-door a bit faster than the “T” trolley.

The argued advantage for the recumbent is lower frontal air resistance. When coasting downhill I could see a small advantage over my friends on regular road bikes but I seemed to me that it could be improved mainly because the seat was wide thus forcing my arms to be even wider on the steering bar in back.

I designed a much narrower seat and a shorter, curved steering bar. The design was easy, but bending the aluminum tubing and arranging for the welding took some effort as I had to design bending and welding jigs. The bending jig was cast from concrete in a mold based on a cookie tin and the welding jig made from wood. The resulting seat was good—permitting even my lower arms to be out of the air stream. 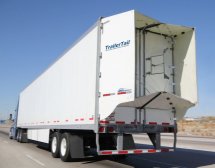 About this time I ran across an article in Science News about efforts to reduce the aerodynamic drag of 18-wheelers by attaching a cowl to the rear of the trailer to shape the leaving air stream into a less turbulent form [1]. Realizing that I could try it on the bike I made such a cowl; a light and rigid affair of one-quarter inch cellular foam and aluminum wire that I could wear like a cape.

Repeated coasting, with and without the cowl, on a long local hill without much traffic, permitted noting on each run the maximum speed attained. There was a measurable advantage of several percent in speed.

It seemed next that it would be good to elevate the pedals and feet into a new position high enough to be within the wind “shadow” of my body, thus further reducing drag. This would have also the effect of improving the leg kinetics to be more like those of a standard bicycle; making the various angles the same. The man who made my bike was local and I prevailed upon him to do the welding required to add a crankset bearing higher up. I made the pieces, jigged it up for welding and had the result back in a month or so.

The result proved easier to pedal—and so to new coasting trials.

To my surprise and disappointment the coasting advantage had vanished. The reason, I guessed in the end, was that the effectiveness of the cowl depended on an undisturbed entering air stream—a stream now rendered turbulent by the raised pedals and feet upstream.

Well, eventually I spent more time on this bicycle than it was worth, but the problems I encountered were engrossing.

Upon reading this piece I expected very soon to begin seeing semi-trailers with such cowls on the roads, but it has been more than twenty-five years since then and they are only now (2015) beginning to appear. I wonder what caused the delay—gas prices I imagine.

This site uses Akismet to reduce spam. Learn how your comment data is processed.